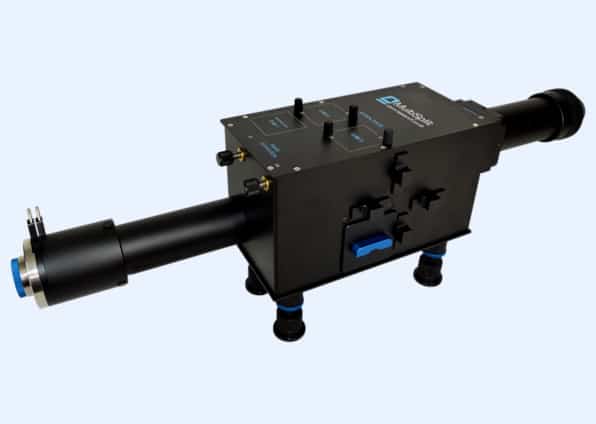 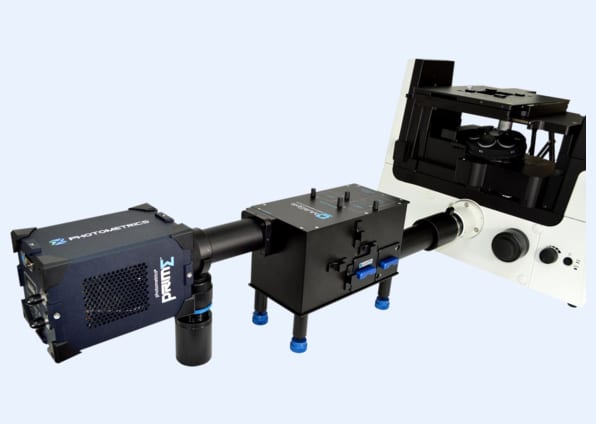 The MultiSplit V2 is the latest member of the image splitter series of our partner company Cairn Research Ltd. It provides four separate, spatially equivalent image components which can be displayed as four quadrants on a single camera sensor. From the user point of view, the MultiSplit V2 has a very attractive design as the four images are produced in a 2×2 square format rather than linear rectangular shapes generated by other image splitters like OptoSplit II, OptoSplit II BP, OptoSplit III. Furthermore, continuing improvements in camera technology potentially allow individual images to be acquired at megapixel resolution, which makes this form of image capture an increasingly viable alternative to the multiple camera approach. Nevertheless, if you prefer a multi camera setup, please take a look at the multi-camera adapters from Cairn Research Ltd..

Fast Simultaneous Imaging of up to Four Channels

Like the other image splitters from Cairn Research Ltd., the splitting can be performed on the basis of wavelength or polarization, allowing applications where there is a requirement for simultaneous or high speed acquisition of multiple emission bands or polarization states. The optical pathway is first split into two and each of these pathways is then independently split a second time before refocusing to generate the four images. The simultaneous acquisition of these images offers a major benefit over manual or electronic filter changers, as there is no need to pause acquisition while the filter position is changed. This allows the camera to be operated in a fast streaming mode.

With the MultiSplit V2 simultaneous multi-depth images can be acquired from up to four different depths in the Z-axis of the sample. In this application, the splitting itself is on a neutral basis, but corrector lenses in the individual channels cause the focus to be at a different depth  for each one in the same sample, allowing the simultaneous acquisition of a small four-channel Z-stack.

Whilst optimized for coupling to a scientific microscope, the MultiSplit V2 can also be used with camera lenses or any other system of lenses which produce an image plane of suitable size and f/number.